It can sometimes be hard to decide what to write about but a cursory glance of the performance statistics for the last 3 months and then viewed slightly differently, over the previous 1 and 3 years clarified a theme that has been developing in my mind recently. Namely differentiating between the fact and what essentially is fiction or noise. Let’s take the oil price. The performance table indeed shows that it has risen 10% during the last 3 months and indeed 98% over the last year! Shock and horror. However, a slightly longer-term perspective of 3 years shows that the price is more a less the same as it was 3 years ago. Those three years have been quite a tumultuous few years and for oil witnessed a period encompassing a complete collapse in the demand for oil during lockdown and a subsequent demand spurt in the recent post lock down months. What is clear though is that we have been here before. 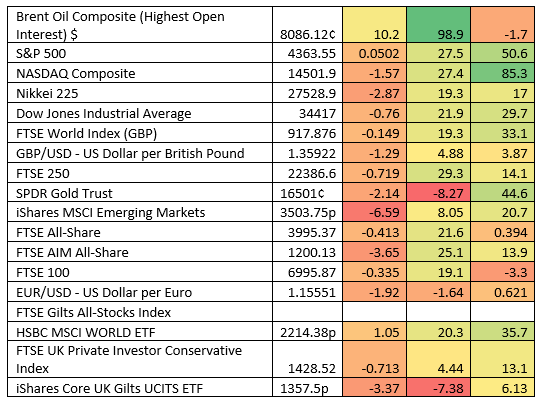 I recall a history lesson at school where we were taught the value of Primary research over Secondary and to look for the original wording and source. This can be especially beneficial when researching companies. Fortunately, the Stock Exchange has a service called the Regulated News Service (RNS). It is a bit like the Associated Press (AP). AP put out the factual story, then news companies take the story, journalists rehash it and if I were sceptical might say that, often the story in the headlines ends up completely different, or at least let’s say, dramatised in one way or another. The RNS service is where a listed company must publish its annual results and any news stories concerning the firm that may affect the share price. So, for example, changes in directorships, new contracts which will significantly affect revenue. When I was relatively new to stock markets an older peer, passed on some good advice, which was to check the RNS each day for companies I follow, or indeed for stories about companies that may look interesting. Today there are literally hundreds if not thousands of these announcements, and while you cannot follow everything, I do still look through the announcements regularly. This is the best way to get the facts, and there are often many facts contained within the statements, such as a company’s set of accounts, that are never noticed or mentioned in the press.

It does seem to be becoming harder to separate fact from fiction. During the recent ‘petrol shortage’ I heard several news reports mentioning the ‘petrol shortage’ when there was no such thing. This was also true of the stories around gas. The initial stories made much comment about the UK and how we were at the whim of Russia. A search on the ONS or British Gas website shows the UK receives 44% of its gas from the North Sea and the East Irish Sea. The rest comes from various countries but a large amount from Norway and Denmark with under 5% coming from Russia.

24-hour news and social media clearly make news travel a lot faster but are also making it harder to get the real facts through, although conversely this can create opportunity if a company is sold off when the facts are wrong.