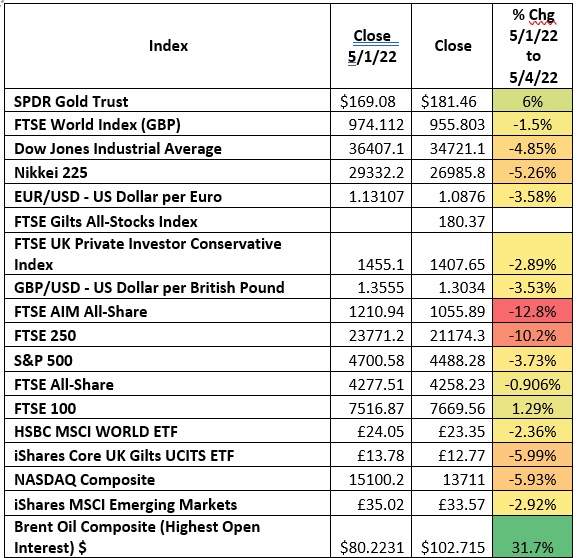 Generally financial markets fell back during the quarter, understandable given rising interest rates and what for a period of time included the possibility of a major conflict between NATO and Russia. The fact that the war in Ukraine, so far at least, has been localised put markets back on a more stable footing.

Oil unsurprisingly was the biggest riser, increasing 31% during the quarter and gold, traditionally a safe haven in difficult times, ended up 6%. Our own FTSE 100 was the best performing major global market managing to end up 1.29%, this is due to its large concentration of oil and mining companies. With interest rates going up, UK Gilts fell 5.99%. Traditionally government bonds are considered low risk but when interest rates rise, bond prices fall. We are significantly underweight in bonds and sold further holdings of bonds earlier in the quarter. Monies raised are being reinvested into higher yielding shares and funds. I note that there are still many UK funds which invest in stock markets whose dividends are 5 or even 6% per annum. Far more attractive than government bonds.

The most interesting investment fact I have read recently is about Berkshire Hathaway. For those that do not know the firm, it is the company run by the famous and most successful investor of modern, if not all time, Warren Buffet.

Buffet took control of Berkshire Hathaway in 1964 which at the time was a failing textile business. He began investing in insurance businesses. Today Berkshire is the eighth largest company in the world and owns some well-known brands such as Duracell and stakes in large US companies such as Coke, Kraft Heinz and American Express. Berkshire’s market capitalisation is now $780 billion and growing. Warren Buffet puts his success down to compounding – that is, reinvesting profits, time and again and not overpaying for shares.

While reading about his firm this week I found out that Berkshire only employs 26 people, which I found quite astonishing. Their revenue last year was $354 billion, and they made $111 billion profit. It is true that Berkshire is effectively an operating company and the underlying investments it owns, themselves employ many thousands upon thousands of people but nevertheless, how many other businesses the size of Berkshire would end up employing thousands of staff ‘to look after’ the firm’s investments, introduce regulations, forms, controls? Berkshire manages the whole outfit with 26 people. A cursory glance at their website also shows that they do not seem to use cutting-edge technology. Perhaps they just do the basics of investment well.

Another theme favoured by Buffet is buying shares for the very long term and keeping them. One way of looking at this is the chart below. It shows the Dow Jones Industrial Average going Back to 1860. 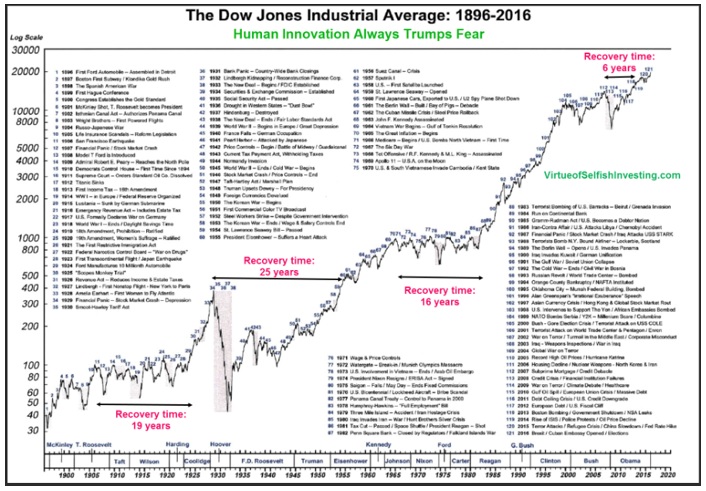 The main point is that stocks go up over time as economies grow. However, they are interspersed with long periods of underperformance. After the 1929 Wall Street crash you can see that it took 25 years for the stock market to get back to its high of early 1929. Even still for those alive at the time it must have seemed quite amazing to claw back all that ground given the disastrous scenario that unfolded from 1929 to 1932. Folk stories telling of brokers jumping out of the windows of New Yorks skyscrapers and even Winston Churchill nearly being made broke. Of course not all stocks recover, this chart is referring to markets as a whole. These days bank shares are nowhere near the levels they were in 2009 but the stock market on the whole is much higher. That is due to new businesses coming along, creating growth and economies ending up larger than in the past. Tesla and Netflix being examples of new industries that were only in their infancy 15 years ago.

The financial subject on everyone’s lips is inflation. Not too long ago we were focussed on the potential for lost decades of growth and Japanese style deflation, China was flooding the world with cheap goods and interest rates in Europe were negative. European banks were penalising customers for keeping money in the bank!

The way that stock markets have behaved in the last month has been one of the most interesting in the last twenty years. Back in 2003 a term known as the ‘Greenspan put’ was coined. Greenspan was the Chairman of the US Federal Reserve and responsible for setting interest rates. As he cut interest rates, the stock market went up, the rational being that with money being cheaper, business could borrow to expand and profits would be higher. Conversely a pattern also emerged that if Greenspan signalled that he would increase interest rates the market went down. The Fed seemed to reverse policy if markets fell too much and start to cut interest rates to give them a boost, worried that markets would collapse if they increased interest rates too much. This cycle led many to believe that Greenspan was at the mercy of financial markets when he should have been paying more attention to inflation. Then came the financial market meltdown in 2009, when Bear Stearns and Lehman went bust. In addition, governments took on massive amounts of private debt. Interest rates were cut to near zero and lower still during COVID.

Since the financial crash of 2008/9 central banks have struggled to increase rates and, on most occasions, when they have done so, there has been a fairly violent reaction from stock markets. When that has happened, central banks have tended to soothe markets concerns by either reversing and cutting rates or telling markets they will keep them low for longer. As recently as 2018 when the US Federal Reserve began to increase interest rates, markets fell 6% and the Fed reversed policy again.

Two things happened this quarter. The US Fed stated that it is finally going to increase rates and fairly rapidly saying that they are likely to increase interest rates 6 times during 2022. They are likely to go up from zero to 2.5% this year. While 2.5% is not historically very high, it is a significant change from several months ago.

The second thing that happened during the quarter is that stocks markets have not collapsed. They have fallen slightly but there has been no sense of pending doom as has often been the case during the last twenty years when markets have become very unsettled at even the prospect of higher interest rates and despite the Ukraine situation. The creation of new jobs in the US economy is very strong indicating that the US economy is still growing at a fairly rapid rate. Stock markets seem to have decided that finally, for the first time since the early 2000s that markets can cope with rising interest rates. This is a good sign of the underlying strength of the economy but of course has taken 12/13 years since the financial crash of 2009.

Run-away inflation has very negative effects but central banks have managed to avoid a deflation disaster. They now need to get inflation expectations under control which is why they have finally (somewhat belatedly) said they will raise interest rates and quickly. The jury is still out on what inflation will be more than a year out. There are those who think we are in an entirely new paradigm and that inflation is here to stay. I think it is too early to take that view. Firstly, the statistics themselves still include many anomalies from Covid, partial lock downs, changes to behaviours such as working from home. Commodity prices have clearly risen enormously but again, we are comparing to a time when the oil price fell to zero and you literally could not give it away as everyone was locked inside their houses. Take even the Ukraine situation. There is disruption to oil and some commodities such as wheat but could that be eased looking a year out. What we do know is that consumers are going to get squeezed by rising prices and rising interest rates. These two things will slow economic growth. What central banks do not know yet is where the new natural rate of interest rates will settle. The best guess perhaps being 2.5%. In the old days it may have been around 5%, meaning mortgage rates of around 6.5% or 7%. Levels of that nature now would surely cause a large fall in the housing market and significant economic pain. Policy makers will likely aim for a level of around 2.5% and hope that this is enough to bring inflation back to around 2.5-3% without causing too much economic pain.

One of the best ways to defend against inflation is to invest in certain stocks and reinvest the profits or dividends. Investors of course have to be choosy. Some companies will be able to increase their profits and increase their dividends, and when for periods of time it does not work out the answer is to keep hold of them and buy more. The caveat is doing research and stick to good quality.